So much has happened since I posted that last update.  I spent 6 weeks on 24 hr a day antibiotics, and when I went back to the doctor, everything had healed nicely.  They pulled the pic line, and I was started on an oral antibiotic for an unknown length of time. It is May 1st, and I'm still on them.

My husband's only living sibling died on Feb 1st, he was 95, and I was able to go to his visitation and funeral as long as I pushed a walker with about 5 pounds of antibiotics strapped to it.

March 1st my phone rings, the lady said Jettie, Belinda's dead.  Belinda was my youngest sibling, and the only one I had contact with for the past few years.  She had a wreck in September caused by a stroke, and had not been well since then, but no one expected her to pass.  She had chosen cremation, so we had a memorial service planned for March 16th.  It never happened because of the virus situation, it will hopefully be held sometime after all has quietened down.

My last time being in a store was on March 13th, and I've only been away from the yard 3 times  since then, once to my daughter's house so hubby could deliver a rear end to replace the one that got broken when she slid into a ditch and broke the axle.  And once to just drive about 25 miles to get away from home for a few minutes.  That was to the school that I graduated from almost 54 years ago.  Since graduation can't happen, they have a beautiful sign that shows each of this years graduates for about 10 seconds each, and then goes to the next one.  And the other time, was to pick up my online grocery order at local Walmart.

So we are here patently waiting for things to get back to something close to normal, and watching Bocephus, the 4 legged child, play with his new toys.  He is quite the handsome dude. 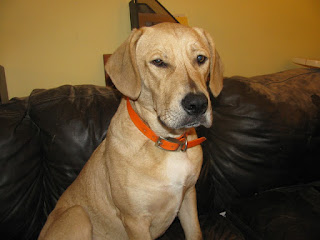 Best natured dog I have ever had the pleasure of belonging to, Minds well most of the time.

Dear Jettie,
I'm glad to hear you've healed now, albeit you're still on oral antibiotics. A
And I'm sorry you've had some deaths to cope with too, especially during these strange times.
Do you find thins hard? I'm sure I would and do, with less to complain about and even with a strong Faith.
Keep us updated. I will pray for you.

My blog is here, of you've a mind to read it:

Hi, Jettie! Love your name:) I just popped over from NanaDiana's. I read your comment to her and just wanted to drop by to say "I understand." My situation did/does not sound as bad as yours but it still was not the relationship I've always wanted with my mother. But the good thing is that I learned what NOT to do in raising my children and grandchildren:) Hope you have a lovely Mother's Day and hope you get well really soon. This quarantine business has been just awful but maybe brighter days are ahead...and it can't come soon enough! I'm at cherischatter.blogspot.com if you have time to dropy by sometimes.

I know from our daily contact, Jettie, what life is like for you..so much sorrow and pain in the past few months. Love how grown up BO is now. I remember when you got him. Love to you- Diana

The above article is nice and interesting, thank you willing to share! Greetings success of admin Cetak Buku Murah wish you deign to visit my website, thank you :)

Jettie
In accordance with the new FTC Guidelines for blogging and endorsements, you should assume that every book reviewed here at Jettie's Ramblings was provided to the reviewer, by the publisher, media group or the author for free. no financial compensation was received, unless specified on the review..All opinions expressed are my own. Now about me..I'm a wife, mom, grandmom, and I'm a 'crafty person'. The girls used to refer to my 'crafts' as my hobby of the month. I finally found soapmaking and floral design, and those I've stuck with for more than a month, florals for about 8 yrs, soapmaking for 6 yr. I also like writing, I've self published 1 book with a co author, A Man Called Brown, abt my gggrandfather, and written several short stories for the entertainment of myelf and a few friends.